Tets Ohnari is a contemporary Japanese sculptor who lives in Prague, Czech Republic. He has exhibited sculptures and installation works in several countries using various materials such as glass, stone, and wood. Influenced by his father who is also a sculptor, he has been exposed to artistic practices since his childhood. Hailing from this background, he works with the relationship between the intrinsic value of “things” other than human beings, such as insects, grass, stones, and trees, and the space in which they exist.

His goal is to present the phenomena that occur when the materials he uses are changed by human hand in a society where the act of „creating” seems to become increasingly mandatory. 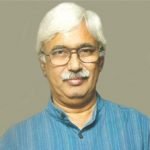 A.V. Ilango is an established, self-taught artist and sculptor from Bangalore. As he was brought up in a rural setting, Ilango uses these memories as inspirations that inform his artworks and influence his rich colour palette. His works depict Indian characters, culture, religion and rituals presented as part of everyday-life. Apart from human figures, the artist has been studying the most familiar of the Indian animals – the bull, the motif having been an integral part of primitive, folk and classical Indian art. The artworks are rendered with angular brush strokes that suggest an energy, thus reflecting the energy of the bulls.

A.V. Ilango has been teaching drawing and painting for more than twenty five years. It was an art class till three years ago. In October 2004, he launched Ilango’s Artspace at 62 3rd floor, Rd. Street, Abhiramapuram, Chennai 600018.

This art space is not only his studio, but a place where he nurtures creativity in other minds, from little children to adults. The objective is the process of drawing and painting to express oneself in visual arts while enjoying the act of thinking and creating in an informal and personalized ambiance. Ilango says: “Art lets you be in the now.” He believes in the traditional guru-shishya pedagogy. The learning is customized, based on the aptitude, sensibility and passion of the aspirants. Ilango’s Artspace showcases the young artists who practice under his guidance in India and abroad.